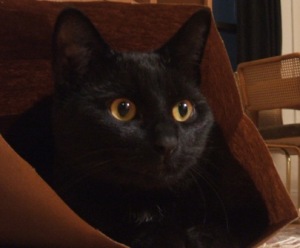 Once I started to find the joy in owning one cat, I could hardly wait to have another. My roommate Cassandra was extremely skeptical, as the thought of two Smirnoffs running around seemed like stress overload. She had a point.

I started volunteering at the Animal Rescue League of Boston in October 2011, but I worked only with the dogs—it was the only training session I had been able to attend due to my graduate course schedule. But I’d still wander around the cat adoption area every now and then and take a cat out to play with in the visiting runs (even though I technically wasn’t supposed to).

One day I brought a friend to the shelter to show him around and I was looking for a cat that we could both sit with for a while. I noticed Halibut in a bottom cage, sitting quietly and staring out with bright orange eyes. In the run he was calm and friendly, allowing us to pet him and playing a bit with a toy. I read his story of how he had lived with another cat and was playful and talkative. Then we left, and I didn’t think about him. And then I did think about him.

Occasionally at the shelter, I’d stop by his cage to say hi. All through November he was still there, no one having adopted him. I noticed his skin had a couple small scabs on it—one on his chest and one on his head—but the staff assured me it was just stress-related. He went to an adoption event in early December and came back unadopted. I tried mentioning to Cassandra that I was thinking about a second cat, but she would quickly brush it off, saying something like “Smirnoff is bad enough” but also, “I’m not going to say no” (while clearly saying “no;” but if she wasn’t going to be upfront about it, then I was going to ignore her implications). Regardless, I was going home for two weeks for Christmas vacation and there was no way I could adopt a second cat before then; Smirnoff was coming home with me and my parents were barely on board for one cat, let alone two. So I made the decision to wait and see: if Halibut was still at the shelter after Christmas vacation, it would be a sign that it was meant to be. But then I couldn’t wait.

I emailed another volunteer, Amy, and told her of my plan:

Me: So I’ve decided that there’s a cat currently at the shelter that I really want to adopt: Halibut. However, since I’ll be going away for about a week and a half over Christmas break, there’s no way I can get another cat until after I come back…So, what I’m [saying is] that if Halibut is still available after New Years (with the full realization that he will most likely get adopted by then), I am going to adopt him.
But I think he’s a good candidate for being Smirnoff’s bff.
Sound fair? 🙂

Amy: I agree!!! Awesome idea! What if we got him into foster until the new year? Would that help commit?

So, I never really had a chance; Amy is a great cat saleswoman. Halibut went into fostercare and I spent all of Christmas break with an incredible secret: I’d soon have a second cat. I had told Cassandra about it, but she didn’t think I was serious, because when I returned to Boston and informed her that there would indeed be a second cat in less than a week, she freaked out. I felt bad because the idea of two cats was clearly stressing her out, but I knew in my heart that Halibut—already named Bacardi in my mind—would be a good match for Smirnoff. So I swore to Cassandra several times that if for any reason it didn’t work out, Halibut would be returned to the shelter and Smirnoff would stay (which was never a question).

On January 9, 2011, Bacardi came home. But he didn’t look all too well. He had a patch of hair the size of a quarter missing from his back, dried up sores, and general grunginess. Plus he smelled from having just been neutered (an odor equivalent to being doused in male cat urine). He cried loudly all the way home; people on the T (subway) kept wondering what was wrong with him and of course I didn’t know—I’d just adopted him. When Cassandra finally came home, all she said was, “What is that?” He was not a cat that she would have ever chosen.

But it became clear after a while (both to me and to the vet) that Bacardi’s skin issues were not simply stress-related, but food allergy-related. A change in diet, a good bath, and he started to look (and smell) much better. And as far as a match for Smirnoff goes…I couldn’t have asked for anything better. Bacardi is a submissive cat, whereas Smirnoff is dominant, but Bacardi doesn’t let Smirnoff walk all over him either. There were plenty of hisses and growling at first from both parties, but a couple days later I found them sitting next to each other on a chair and I knew it was going to work.

I knew Bacardi was meant to be part of the family.

5 Replies to “The Story of Bacardi”