I always thought that fostering would be easy. I know, I know. But in my head, it always seemed like the perfect set-up, especially for people who go on vacation a lot or don’t have a ton of money to take care of an animal of their own. You simply take a cat (or dog, or small animal) home for a week or two, or perhaps six months at the longest—you can set your own time frame—and then you return it to the shelter to be adopted into a wonderful home. It’s like rent-a-pet, only you’re doing a great deed for an animal in need.

Still, I had never fostered because I was at work or in evening classes, plus my roommates who’ve filtered in throughout the years would have killed me. That, and I wasn’t sure how Smirnoff and Bacardi would handle another cat. My current apartment is too small for a third adult cat and its layout is too open to introduce a new cat properly, but I figured a kitten would be ideal since they’re so small and require very little room (to begin with). So when I finally made the decision to move apartments, and with the possibility of fostering in the new apartment blossoming, I figured I would give it a test run before the actual move to see if it was even a good idea. Mostly, it was to test Smirnoff and Bacardi.

Raymond was a cute little two-month-old kitten who was on quarantine (Q) at the shelter. He was on Q because he had scratched the person who found him as a stray, and legally he wasn’t adoptable for 10 days. I’m not sure of the reason for this law (it might have something to do with rabies?), but when blood is drawn, the cat in question is put on Q. No exceptions. When I saw Raymond, he only had two days left, but since he wasn’t adoptable during that time, I asked if I could take him home to foster. Again, as a test.

So little Raymond came home with me. I quickly discovered that he was the perfect kitten: very people-oriented, loved to play and loved to be petted, and would purr like a motor as soon as you showed him any attention at all. The second night of his stay, I woke up in the middle of the night to find him curled up in the crook of my arm. My heart melted. 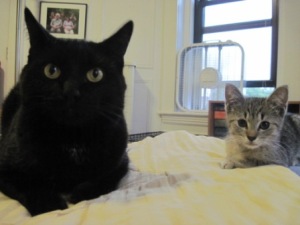 Bacardi was interested in the kitten. I was a bit apprehensive, since Bacardi is very much a Mama’s boy, and I wasn’t sure if bringing a kitten home would change his feelings toward me. But he was fine. I think he was a bit confused (since he still considers himself to be the kitten of the household at the age of 3) and he’d watch the kitten chase the feather toy around the room, and then suddenly pounce on the feather, as if to say “my toy!” They nosed each other and sat next to each other on my bed. It was wonderful.

Smirnoff, however, was thoroughly offended. From the moment the kitten entered the apartment, he was hissing and spitting at it (the kitten was safely in a crate). Even when I had isolated the kitten to my roommate’s bedroom, Smirnoff didn’t want to have anything to do with anyone. If I tried to pick him up, he’d growl. If Bacardi came up to him, he’d hiss. He was a grump the entire two days, and I was never able to have him in the same room as the kitten.

So, in that sense, keeping Raymond wasn’t even a choice. I had finished my experiment and while he was super adorable, I wanted Smirnoff to feel comfortable again. I had let a kitten into his territory, and now it was time to remove the threat. (It was slightly amusing that Smirnoff felt threatened by a tiny kitten.)

Still, placing Raymond back in the cage at the shelter was way harder than I thought it would be. He looked so dejected—hadn’t he just been in a wonderful home? Why was he back? He curled into a ball and rested his head sadly on his paws. I’m sorry, Raymond, I thought. But I promise you’ll find a home soon!

“You have to write up a foster note,” several volunteers told me. “It gets them adopted faster.” Apparently, a testimonial that a cat or kitten does well in a home environment is something adopters like. So I wrote a few lines, printed it out, and put it next to his kennel card.

Raymond is a fun-loving, wonderful kitten who will delight anyone who adopts him! Like a typical kitten, he spends most of his time running around playing with whatever toys he can find and then falling asleep where he’s sitting. He also enjoys watching TV.Raymond is very people-oriented. He comes running whenever you enter the room—he’ll follow you wherever you go—and loves to climb into your lap for some cuddles. As soon as you start petting him he purrs like crazy! Raymond also loves snuggling up at night—so be prepared to share your bed!

Raymond gets along really well with other cats, and would make the perfect kitten companion for your cat at home, or if he’s adopted with another kitten.

It was a Saturday, and adoption opened at 1 o’clock. We get a lot of kitten-seekers in on Saturdays, mostly because it’s the weekend and because most of our fosters come back on Fridays, so there’s a greater selection of kittens. A young couple walked in, and looked around. Raymond was the first cage they stopped at. Then they kept walking, then made their way back to Raymond. I watched them read my note.

I took them to a visiting run and handed them the squirming Raymond.

“He’s the best, he’s a really great kitten. I was his foster mom, and he’s just such a wonderful kitten.”

They asked me a few questions, and I tried not to come off too strong. I left them alone with Raymond. Then what seemed like an eternity, but was only about 20 minutes, I heard the golden words: “We’d like to adopt him.”

“See? I told you I’d find you a good home!” I said to Raymond after the paperwork was all done and I was putting him into his carrier. And suddenly I didn’t feel bad anymore. I knew he was headed to a good life. And I haven’t seen him since. 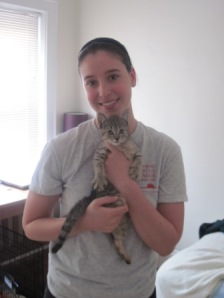 Because of Smirnoff, I won’t be fostering again any time soon. But what I experienced in two days—what I thought would be easy—made me realize how truly amazing foster parents really are. If I had had Raymond for a week—if he had been with me for a month!—I can only imagine how much more attached I would have become.

An animal that never makes it out of a foster home is often called a “foster failure.” It’s a term of endearment, really, because they’re a “failure” born from love. Because the humans who take them in can’t bear to let them go. Giving an animal back, even when you know it’s going to find a great home, isn’t an easy thing to do. Fostering is far harder than I thought it would be, but just as rewarding—and definitely as worthwhile—as I always knew it was. And I definitely recommend it.