November was a good month for adoptions and learning experiences at Best Friends Animal Society in Los Angeles. I’m  kicking myself for the lack of updates on this blog, but once you read this, you might forgive me a little. Here are five major things that happened this month:

1. There Was the NKLA Adoption Weekend

Early in the month (Nov. 9 & 10) we had an adoption weekend at La Brea Tar Pits. All NKLA (No-Kill Los Angeles) coalition members were invited to bring cats and dogs (and a couple bunnies) up for adoption. We had groups like Angel City Pit Bulls, Kitten Rescue, Pug Nation, L.A. Animal Services and many, many more.

It was a huge event—Best Friends alone brought about 60 cats and even more dogs. I worked all weekend in the cat tent helping with adoptions. We (Best Friends) adopted out about 45 kittens and senior black cat Sabrina found a home! My proudest adoption was of two adult cats Haio and Harry, who had been living in our free roam room for a few months. They were both large white & tabby male cats, were both aged at about four years old, and both super chill (but weren’t related, even though they looked like they could be). For whatever reason, they kept being overlooked at our center. But that weekend I sent them home together! Now they live in a good home and have each other for company.

NKLA Adoption Weekend was exhausting, but very rewarding. The two-day event sent home almost 400 animals in total. The best part, though, was that L.A. Animal Services (comprised of six L.A. city shelters) went back with empty trucks! In the cat tent, they adopted out all but six of their cats (most of which were adults). Out of those six, four went back with rescues, and Best Friends took home two, which means all of their cats were saved from possible euthanasia.

What I learned from such a large event is that it doesn’t matter so much where people adopt their animals from (a small rescue, a large shelter, a no-kill), just that they adopt!

I’ve mentioned Dahlila in a previous post and since then, she was transferred to our NKLA Adoption Center in West Los Angeles. However, she hadn’t been adopted out there was returned a few weeks ago because it was discovered that she needed a dental done (including a tooth extraction). While it was bitter-sweet to see her returned to our center, I was happy to keep her company once more.

She did come with us to the NKLA Adoption Weekend but had no interested parties. As we were closing up on the last day, what seemed like a very good match for her walked into the tent! But unfortunately, they hadn’t been anticipating adopting a cat and we had been closing up shop for a good 20 minutes. So even though I gave them mine and Dahlila’s info, they never followed up.

So Dahlila is still with us. The lead cat caregiver says (jokingly) that I’ve ruined Dahlila. Because since giving her so much cuddly attention, she now meows non-stop when someone is standing outside her cage (or when the cat caregiver is sitting at her desk)!

But what comes out of all of this, is that I think I’ve convinced everyone what an amazing cuddly cat she is despite her grumpy-sounding exterior. And now that she has had her dental and is completely healthy, I’m sure a new home is just around the corner.

In the meantime, more cuddles for me.

3. I Had a Love Affair with a Chihuahua

I’m definitely a cat person. I like dogs, but even after my love affair with a chihuahua named Mr. Ed, I’m definitely still a cat person. I used to say that chihuahuas weren’t even dogs (because of their size and yappiness). But in California, the shelters are knee-deep in chihuahuas and it’s given me a new perspective on the breed. For one, they can be really great dogs.

Mr. Ed has been at the shelter since before I started working there. He didn’t get a lot of looks in general, because he’s a middle-aged tan chihuahua. (There are dozens of them, so it’s hard to stand out.) He goes on a lot of mobile adoption events, but still hasn’t been taken. So I decided to do a sleepover with him at my apartment.

Mr. Ed is a great dog. He is very warm and loves to cuddle. I think he’s part chihuahua, part Mexican hairless, because his whole underside is completely bare. He sleeps under the covers at night. He is pretty quiet, and only barks if someone walks outside the window.

His only flaw is that even though he knows he shouldn’t pee inside, he has a small chihuahua bladder and has to go every three hours during the daytime. When he needs to pee, he has to pee; he can’t hold it very well. The one time he had an accident in my apartment (and the one time he peed in my car), he tried to cover it up (by drinking his pee), which means someone must have scolded him in the past. But someone who could pee pad train him, or has a doggie door for him to go outside, wouldn’t have a problem. 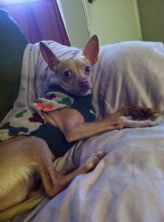 Mr. Ed likes to go on walks. I took him for a three-mile hike, and he trotted along the whole way. He’s great on a leash. He is good with cats, in that he completely ignores them. Even when Smirnoff decided he’d had enough of Mr. Ed and attacked him, Mr. Ed didn’t fight back. (He was okay, just a couple small scratches.)

But I don’t have the ability to own a dog right now, and my cats get very jealous. I’ve learned that dogs, even super easy ones like Mr. Ed take up a lot of attention, which I normally give to my cats. And I don’t want to spoil my cats any less.

Even though I only took Mr. Ed home twice, he’s now a bit clingy towards me. So I know I can’t bring him home again since I can’t adopt him. It wouldn’t be fair (on him or my cats). But at least now I can tell any potential adopters everything they might want to know about Mr. Ed the chihuahua. And hopefully he will find a home soon!

4. I Learned to Appreciate Kittens More

Anyone who reads my blog regularly knows that I’m a huge advocate for adult and senior cats. Not only are they amazing, loving animals, but it takes longer for them to get adopted than younger cats and kittens. It can be especially frustrating sometimes at my shelter, because we are in Southern California where kitten season basically never ends (cats breed year-round in this climate), and because my shelter (fortunately) has a kitten nursery where we can raise fragile bottle babies and under-aged kittens. It’s an amazing program, but it does mean that we consistently have kittens up for adoption and our adult cats can get overlooked.

However, I’ve spent a good deal of downtime in the kitten nursery, expanding my appreciation for the little ones. I met a feisty kitten named Elroy, who is so hilariously full of life, that everyone has fallen in love with him. (He is currently in a foster home, but I can’t wait for him to be back once he’s old enough, if the foster family doesn’t steal him away!)

It’s important to keep in mind, in America’s shelters, cats have it pretty bad overall, but the highest population of euthanized animals is actually under-aged kittens. Most shelters can’t take care of them unless someone is willing to take them home. Best Friends’ nursery program is unique, in that we’ve been able to save around 1,800 kittens this year alone that would have otherwise died.

Also, this month, I got to celebrate some of our longer-term kittens find homes: Carlos, Zabaglione, Jupiter, Peter Parker, Bilbo, Sammie, and others. (That’s how many kittens there are, that some of them get looked-over and don’t find homes for months! And, of course, triple in size in the meantime.)

So I’m now a little more forgiving of people who come into the shelter and decide on a kitten instead of an adult cat. Saving kittens is a huge part of becoming a no-kill shelter/city/nation.

5. Some Amazing Adult Adoptions Happened, Too

Being such a large facility, everything is on a much bigger scale. Which also means that long-term residents are generally much longer than at the smaller shelters/rescues. A couple of our cats had been with us for almost a year and a half, waiting for their new homes. (Some still are.) And while a couple of these cats are special needs, many of them are perfectly good cats that just get looked over for no good reason.

It’s important to pay extra attention to these cats and give them good socialization, in order to make them present better to adopters. It’s also important to find new ways to market the cats and have them stand out among the others.

A couple weeks ago, I was talking with our lead cat caregiver, who had the idea to create stories for the longer-term cats (which they don’t do for all of their cats because of the sheer number and quick adoption rates for some of them). Apparently the shelter has done stories in the past, but not recently.

Knowing that the cat caregiver didn’t have time to make the stories herself, I took the initiative. I showed her a mock-up, and with her approval, made stories for our top five longest-term resident felines.

In the month of November, two of those cats were adopted: 8-year-old Mr. Big (who was adopted a year to the day of his being at Best Friends) and 3-year-old Killean (who had spent about half her life with us). We also adopted out an extremely overweight lady, Tabitha, who was in the top fifteen for longest residents. That same weekend, we adopted out a very sweet cat, Inti, who had come to us with bad ulcers in her eyes, that we treated over several months. Her medical past made her harder to adopt out, but she, like all of these cats, found truly amazing homes.

I don’t know if my stories made any difference, but it was extremely rewarding to be part of helping those kitties find homes. And even if any of these cats are returned to us, at least they will have had a chance to get away from the shelter. But hopefully they will have their new homes forever!

November was my fourth month working at Best Friends, and the experiences and knowledge I have gained over that time is staggering. I was happy and comfortable in Boston and had my crazy cat ladies and all of my friends, but taking the leap and moving to Los Angeles was a great choice, and one that I’m very happy with.

I know I can make a difference out here, even if it’s one cat at a time, or even one little chihuahua.

And that is something I am thankful for.

5 Replies to “A Month to Be Thankful For”