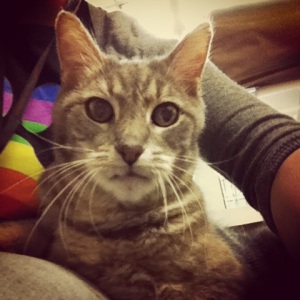 Saying goodbye is always bittersweet and this was no exception. Kirby, our 14.5 year-old diabetic cat left for the sanctuary this past Monday, where he will live out the rest of his days in luxury (or, if he’s lucky, get adopted). The Best Friends sanctuary is a pretty great place for an old or sick animal, or one with behavioral issues. They have a reputation for adopting out special needs animals at a pretty good rate. In Kirby’s case, he was accepted into the sanctuary because of his age and geriatric condition–unfortunately he was very unlikely to get adopted from our LA center, and had been with us since April.

That being said, we still had to send in an application for Kirby’s acceptance into the sanctuary, just like anyone else who wants their animal at Best Friends in Utah. So the whole cat team (and myself) were thrilled to hear that Kirby was going to be able to receive housing there. Kirby will get spoiled by the staff and volunteers and his diabetes will be managed for however many months or years he has left (hopefully several years!). He’s a pretty mellow guy who can get along with other cats and dogs (but prefers people).

While Kirby had many friends and followers in Los Angeles, once he was diagnosed with diabetes, he had to be kept separate from the general population of cats in order to regulate his food and insulin. So he had spent the past couple months in our intake room where the vet has her desk and can keep an eye on him. He pretty much had free reign of the whole office, and would sometimes make friends (or enemies) with other visiting cats and dogs that were there for medical reasons. I would go visit him during downtime or on my lunch break, and he would come running over with his lip snarled due to only having a couple teeth. He once tried to steal some french fries, and had a knack for knowing when someone was about to use the microwave (not that he was allowed any human food). But at the end of the day, we would all go home and Kirby was still there. No matter how much we all love him, the Utah sanctuary will be a much nicer place for him to live, but I know we’ll all miss him.

I have a special place in my heart for the older cats. Kirby is one of my favorites. But at least this gives me one more excuse to visit the Best Friends sanctuary in order to say hello. When I go back to work after my day off, Kirby will no longer be there. Which is bittersweet. But mostly sweet.

>>Read some cool facts about the Best Friends sanctuary