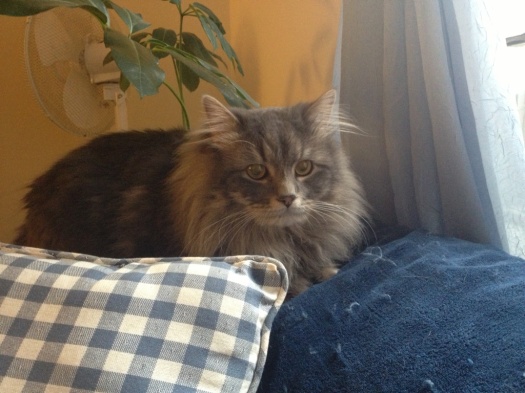 Love knows no bounds. What animals and human beings are capable of because of love, always amazes me.

When a two-year-old cat named Tookie was surrendered to our shelter in October, his whole life changed. Although that’s really true of any animal that is brought to a shelter, but in Tookie’s case it was a bit different. He was surrendered by his owner (due to moving) and because of this was separated from his best friend in the whole world—a pitbull. According to his former owner, the two animals slept together every night. Tookie loved his pitbull friend, but the girl’s mother would only take her dog; she was allergic to cats.

When Tookie arrived, he had that look on his face that shelter animals sometimes have. It’s the “don’t even look at me because I’m not even here” look. He huddled himself in the corner of the cage and melted our hearts. Slowly, day by day, he started to open up: by leaning slightly into head pets, by giving his little “Tookie cry”—a soulful, squeaky chirp. Then he started to have a major problem.

END_OF_DOCUMENT_TOKEN_TO_BE_REPLACED

By now I’ve sent a few shelter cats home with friends of mine. It always makes me a little nervous—what if the cat turns out to be a total nightmare and then I’m the one who helped put it in a home where it’s not working out. But luckily, things have mostly worked out so far.

For instance, last year, I saw a group of kittens at the shelter, including one small gray kitten, and immediately texted his photo to my friend Sonja. She and her (now) husband had one cat, Zola, who they adopted several years ago at the age of about 4 months from a shelter in Arlington, Virginia. Sonja had been wistfully suggesting she wanted a second cat for months, and Sam had finally started agreeing with her. But I was the one who texted that photo to alert Sonja of a new litter of kittens to the Animal Rescue League of Boston. A couple days later, she walked home with Milo, a tabby from the same litter as the gray kitten. 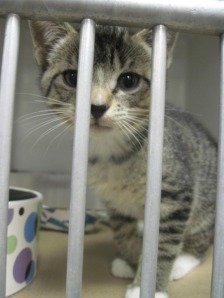 Most people think of cats as solitary creatures. But any cat owner with more than one feline knows that cats can be just as social as dogs— in fact, most cats thrive with a companion or two of the same species.

Kittens use their littermates to learn appropriate behaviors, such as how hard they should bite and how rough is too rough during playtime and which social cues (like a hiss, or a meow) mean what. Kittens that are separated from their littermates too young often turn into cats that bite, unless their owner knows how to teach those things, which takes a lot of effort.

END_OF_DOCUMENT_TOKEN_TO_BE_REPLACED 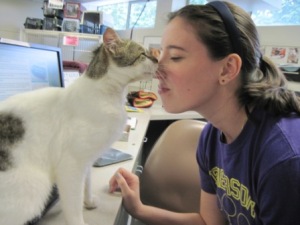 I really like Mondays. I know that sounds weird, but it’s because on Mondays, our shelter is closed to the public and that’s when we get to have cat playgroup. No, you aren’t reading wrong, and I’m not talking about dogs. Our cats get a playgroup of their very own.

We close all the doors to the adoption center, put up signs to make sure no dogs come through, put a litter box out, and grab the extra pair of hawk gloves (as a precautionary measure—but they’re hardly ever needed). Then it’s time to bring out the cats.

It’s really important to go slowly. Bring out two cats, let them settle in the room. Then bring out another. Cats are environment-sensitive animals. Some get nervous being taken out of their cage and into a room they’ve never been in before. Some, of course, hate other cats. If we know that ahead of time (either from owner testimony or our observations in their cages) we might not bring them out. But usually we’ll try every cat at least once. Because sometimes they do change their mind, and sometimes a cat that you’d bet money hates other cats actually likes them (or vice versa). END_OF_DOCUMENT_TOKEN_TO_BE_REPLACED